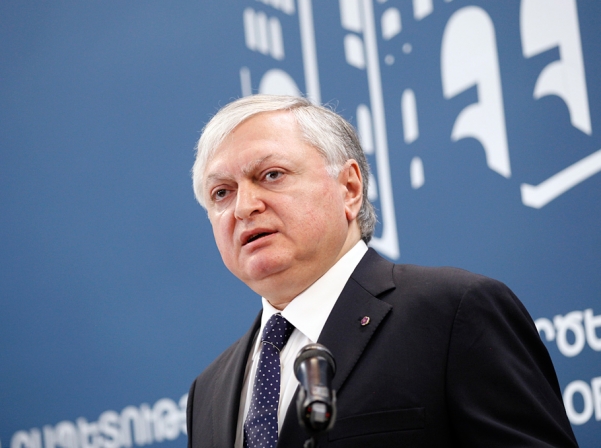 Christians in Middle East Are on the Brink of Extinction, Armenian FM Says

Christians in Middle East are on the brink of extinction, Armenian FM says, Yerevan/ Imediamaxi. Armenian Foreign Minister Edward Nalbandian has stated that the international community should take immediate steps to protect Christians in Middle East who can be considered as one of the most vulnerable groups in the region which are on the brink of extinction.

Edward Nalbandian said this addressing a speech at UN-initiated discussion on “Support to Christians’ Rights in Middle East” in Geneva.

“Unfortunately, Christianity in Middle East is seriously threatened now. Beheading of 21 Egyptian Copts and brutal attacks against Assyrians in Syria were only the recent episodes. Suffice it to say that the number of Christians within the overall population decreased from 20% in the early 20th century to less than 5% as of the early 21st century. Christians in Middle East can be considered one of the most vulnerable groups which are on the brink of extinction demanding immediate measures to protect and support them”, said the Armenian FM.

According to him, the fight against Islamic State, al-Nusra and other terrorist groups should be carried out in the context of preventing genocides.

The Minister recalled the attacks against Armenian-populated Kessab town by Al Qaeda-related terrorist groups and acts of vandalism against religious and cultural heritage of Kessab and Armenian Saint Martyrs Church in Deir-ez-Zor.

“This crime against civilization is the blatant reminder of such barbarian acts in the past- cases of destruction of Buddhas’ Bamiyan statues, Timbuktu Tombs and thousands of medieval Armenian khachkars in Nakhichevan when thousands of monuments were demolished under the Azerbaijani authorities’ careful supervision”, said the Armenian FM calling for severely condemning such steps.

The mission of the Syrian Armenian Relief Fund (SARF) is to provide financial assistance to Syrian Armenians who are victims of the ravaging Syrian civil war.